Who has two thumbs and is excited about hockey season now that baseball season is over? Me! Someone told me I looked like Wayne Campbell, so I had to buy the hat to go with my jersey. I also made an Alice Cooper backstage pass and dressed as Wayne for Halloween a couple of times.

I made basic adjustments in Adobe Camera Raw. I added a curves adjustment layer in Photoshop.

This is a photo of the top of a fire hydrant in Old Colorado City on the west side of Colorado Springs. It was taken during our photo walk as part of Scott Kelby’s International Photo Walk Day.

I used Adobe Camera Raw to make basic adjustments, and I used the HSL tool to adjust the hue and saturation of the blues and aquas. In Photoshop, I used the burn tool to darken some distracting highlights and added an exposure adjustment layer. 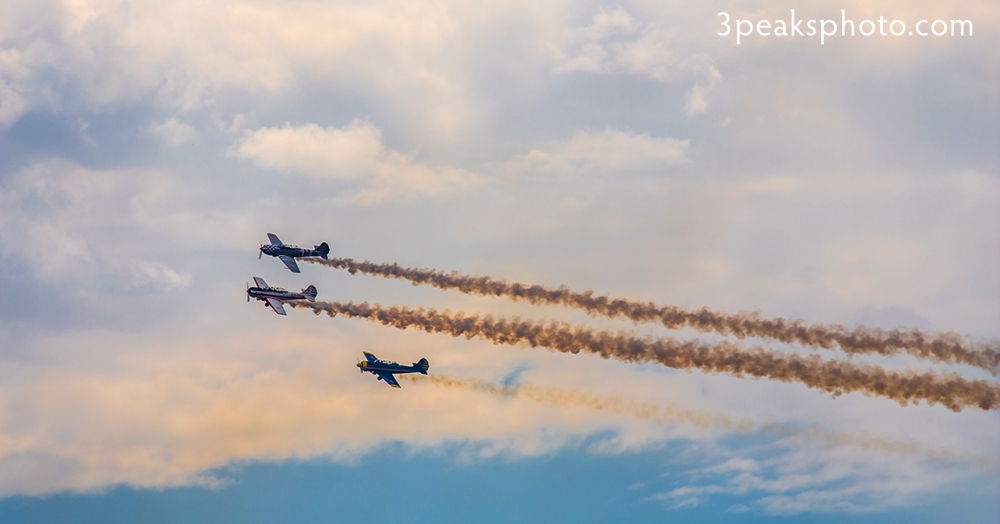 Here’s another shot from yesterday’s airshow before it got rained out. The image was taken around noon. I chose to edit this photo because I detected a bit of color in the clouds, which was enough to create the illusion that the planes were flying off into the sunset.

I started with basic adjustments in Adobe Camera Raw, then worked with the HSL tool to add saturation to the yellows and oranges. In Photoshop, I brightened the planes a bit with the Dodge Tool, added curves and exposure adjustment layers, and cropped. 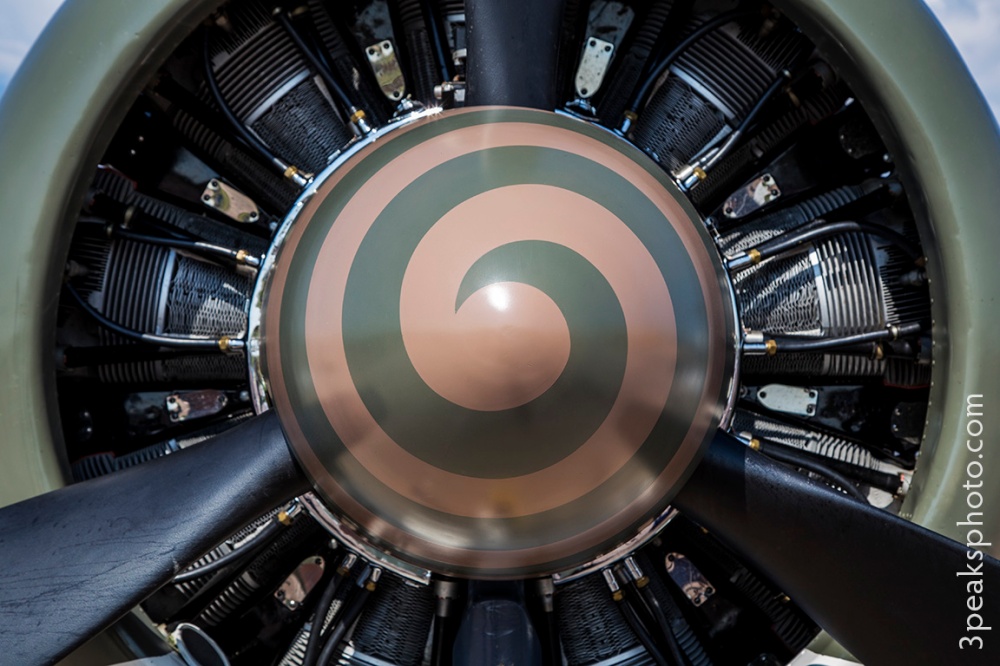 This image was taken today at the Pikes Peak Regional Airshow, featuring many WWII aircraft, including my favorite, the F4U Corsair. This isn’t a Corsair, in fact, the Corsairs didn’t fly because thunderstorms rolled in before they could get off the ground. I just thought it was one of the more interesting shots I got, and you will get hypnotized if you stare at it long enough.

I made basic adjustments in Adobe Camera Raw then used the Spot Healing Brush in Photoshop to get rid off all of the bug splatter and paint chips on the nose. I added a curves adjustment layer before cropping.

What a difference a day can make. I actually looked at the photos in this folder yesterday and didn’t see anything that appealed to me, nor did I have an creative ideas. When I looked at them again today I decided to have a little fun with Photoshop’s Hue/Saturation tool.

This shot was taken during my macro photography class. One of my students brought in a bag of jelly beans, and we had fun arranging them into color groups.

I made basic adjustments in Adobe Camera Raw, then I made 3 more copies of the image, each on a separate layer. I used the Hue/Saturation tool to make global changes to the colors in each layer to create the variations you see. Then I used the crop tool to spread out the canvas so I could arrange the photos into a collage. 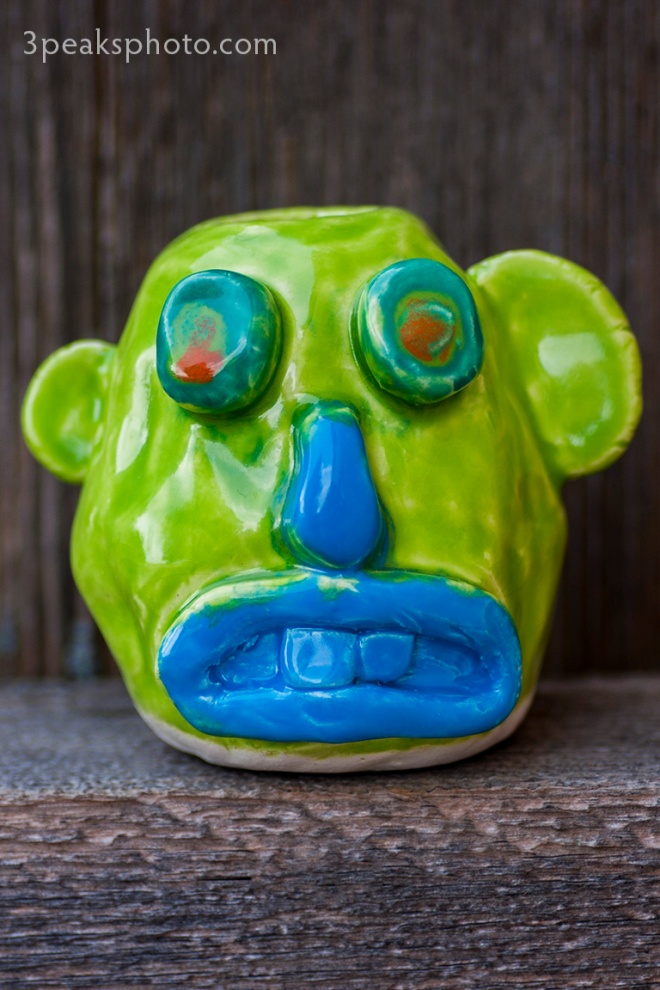 This is Chester. I found him abandoned in the teachers’ lounge at a high school where I used to sub. It turned out that the art teacher was cleaning out her cabinets and getting rid of anything that didn’t get claimed.

Poor Chester. I don’t know why no one would claim him. I found him to be quite charming and felt I hit the jackpot when I found him sitting beside a spout-less tea kettle and a misshapen ash tray. I don’t think it was his boyish good looks that attracted me to him. I think it was the beauty of his simplicity. After all, he only has 3 colors and two teeth. But is he any less a work of art than something much more complicated?

Chester isn’t perfect, and judging by the different sizes of his ears, one could say he was as far from perfection as one could get. After all, art, like many other things in life, is designed to accomplish something, whether it’s to provide a solution, perform a function or create a reaction. Chester definitely creates a reaction, and I believe it’s the beauty of his simplicity that produces a strong impact on anyone who comes in contact with him.

I often talk about simplicity when it comes to composing photos. Many times the simplest images are the strongest. They allow the photographer’s message to be heard (or seen) quite clearly because there are no distracting elements to complicate the viewer. This concept can be applied to many other things in life. When you want a solution to a problem, isn’t the simplest one usually the most effective? Won’t the simplest route get you from point A to point B without getting lost?

Chester still makes an impact on me whenever I glance over at him. He has found a comfortable spot on my desk, and he has a job, too. The large hole in his head and his empty skull make him a great pen/pencil holder. And to think, someone didn’t claim Chester because they didn’t see his beauty or his usefulness.

As usual in these posts, I add information on how the photo was edited. In this case, I tried to keep things simple (get the point?) I made basic adjustments in Adobe Camera Raw, removed some spots with the Spot Healing Brush and added a curves adjustment layer. That’s it.

This is an almost-360-degree view of Bear Lake in the Collegiate Peaks Wilderness near Buena Vista, CO. It was made by stitching 27 horizontal images together, although 34 shots were taken. I had my camera on a monopod, and by the time I got all the way around, a cloud came over the peak on the right side, so I couldn’t use those photos. There are some issues with splotches in the sky that are mostly due to the optical distortion of the lens. This image illustrates why it’s better to shoot vertical images to construct a horizontal pano, but the results are not bad for just messing around with a monopod.

I did some basic edits in Adobe Camera Raw and removed the chromatic aberrations. I did remove spots in the sky with the Spot Removal Brush, but I discovered that those edits didn’t carry over when I merged the raw files into the panorama. The original file is almost 55 inches wide, and I surprisingly didn’t have to crop much off the top and bottom due to misalignment. I used the reposition setting in the Photomerge tool. After merging all of the layers, I added a gradient filter to darken the sky a bit with the Camera Raw filter.

A group of about 30 of us went out to watch the USAF Thunderbirds perform for the Air Force Academy graduation ceremony today, and this is one of my favorite shots.

I made basic adjustments and reduced noise/increased sharpness in Adobe Camera Raw and added an exposure adjustment layer in Photoshop.

I photographed an awards breakfast for the Salvation Army the other day. This piano caught my eye during the event, so I just had to get a shot of the keys.

I used the HSL tool in Adobe Camera Raw to convert to black and white and make the letters and the shadow areas stand out. The image was shot at ISO 12800 and cranking up the clarity slider overemphasized the noise. I also used ACR to make basic adjustments then added an exposure adjustment layer, removed spots and cropped in Photoshop.

This shot was taken at my second roller derby bout on November 11, 2009. Kellie LePage aka “Pepper Slay” of the Pikes Peak Derby Dames Candy Snipers is being introduced to the crowd during the opening ceremonies.

I made basic adjustments to this image in Adobe Camera Raw, then used the HSL tool to reduce the saturation of the greens and yellows to make the reds stand out. I added a little pop with the exposure tool in Photoshop.